Many unique and beautiful flowering species can be found within Warwick Conservation Reserve, and these include over 30 species or subspecies of orchids. Native orchids have underground storage structures (tubers or roots) that allow them to survive the long, hot dry summers underground in a resting state. They grow, flower and set seed when conditions are good in the autumn, winter or spring. They produce new bulbs during winter. They primarily reproduce by producing numerous dust-like seeds, which are dispersed over short or long distances by the wind. Some species also reproduce vegetatively to form colonies with exactly the same flower shape and colour. This can be seen by comparing flower form differences between colonies of Pansy Orchids (Diuris magnifica). There are also several colour forms of local Banded Greenhood orchids, as shown below. Many native orchids have unique associations with symbiotic fungi and pollinating insects, so they are likely to be more sensitive to changes in bushland condition than other plants.

Warwick bushland is an important area for scientific research on orchid ecology, including major studies on orchid pollination (see reference below). With scientific guidance, the Friends of Warwick Bushland help manage orchids within the reserve. They have established propagation trails and record orchid numbers in some areas to help assess the health of the reserve. Work to measure orchid pollination and identify the insects involved is ongoing. This site is also being used to investigate the impacts of climate change and fire on orchids. 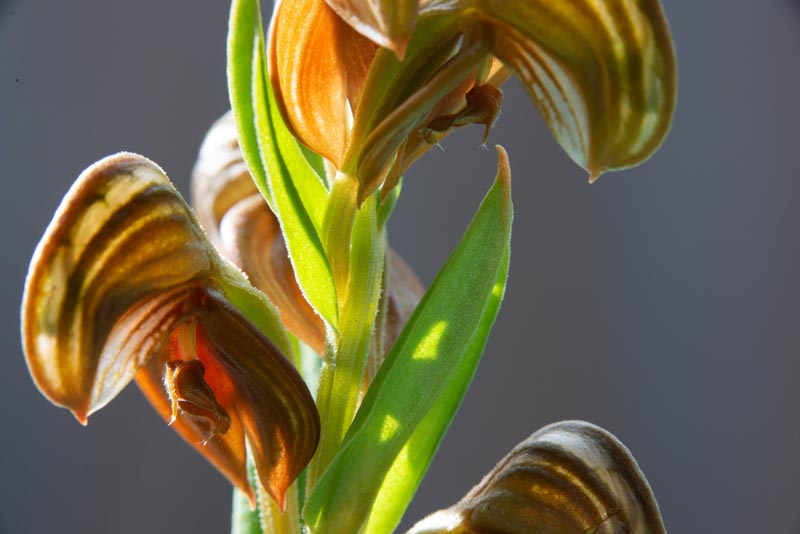 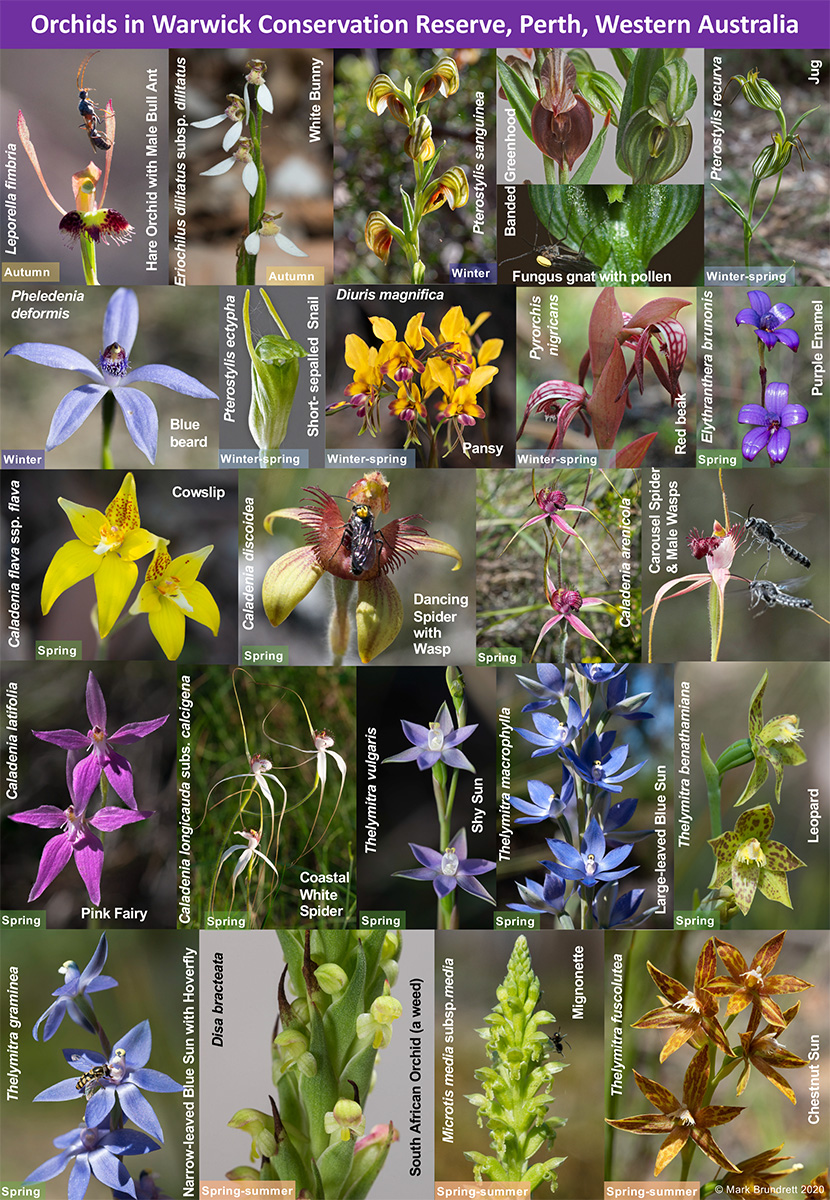 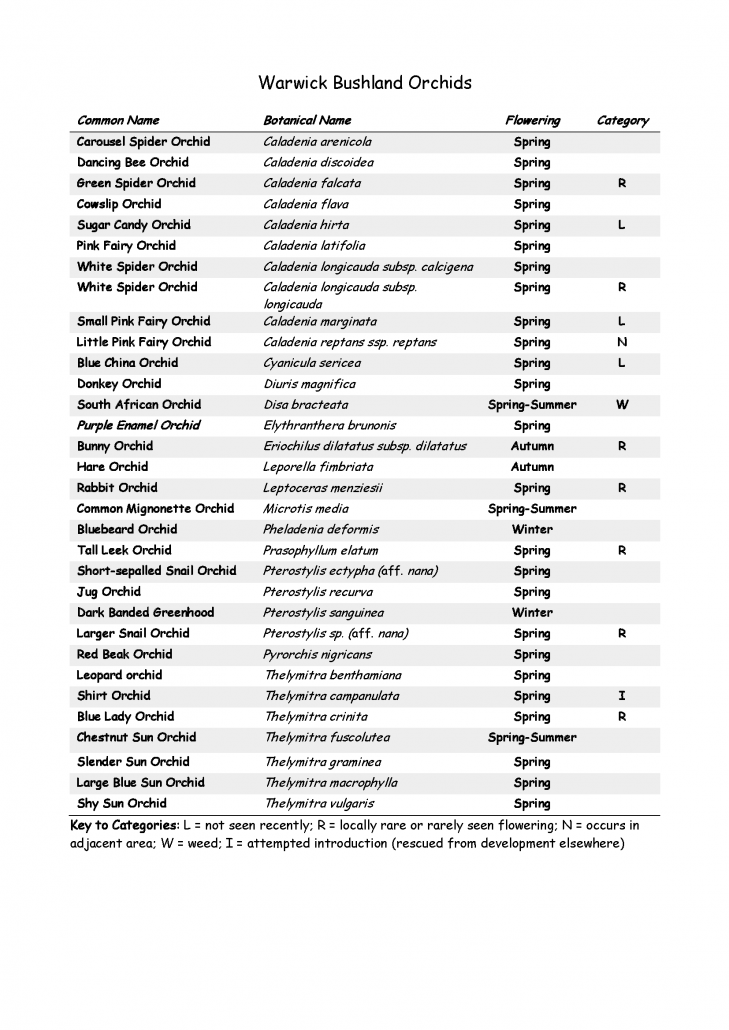 The Pansy Orchid (Diuris magnifica) is an iconic local orchid that was chosen as the Friends of Warwick Bushland logo. This donkey orchid is locally abundant in early spring. It grows to height of 60 cm, with up to 8 large yellow-orange, purple and brown flowers and there often are dozens of flowering stems in one colony. Pollination is by native bees or flies that mistake donkey orchid flowers for native peas that are often flowering nearby and have similar coloured flowers. Native peas provide nectar and pollen to pollinators, but the donkey orchids do not, so are pollinated by visual deception of insects and consequently often have very low rates of pollination (see reference above). 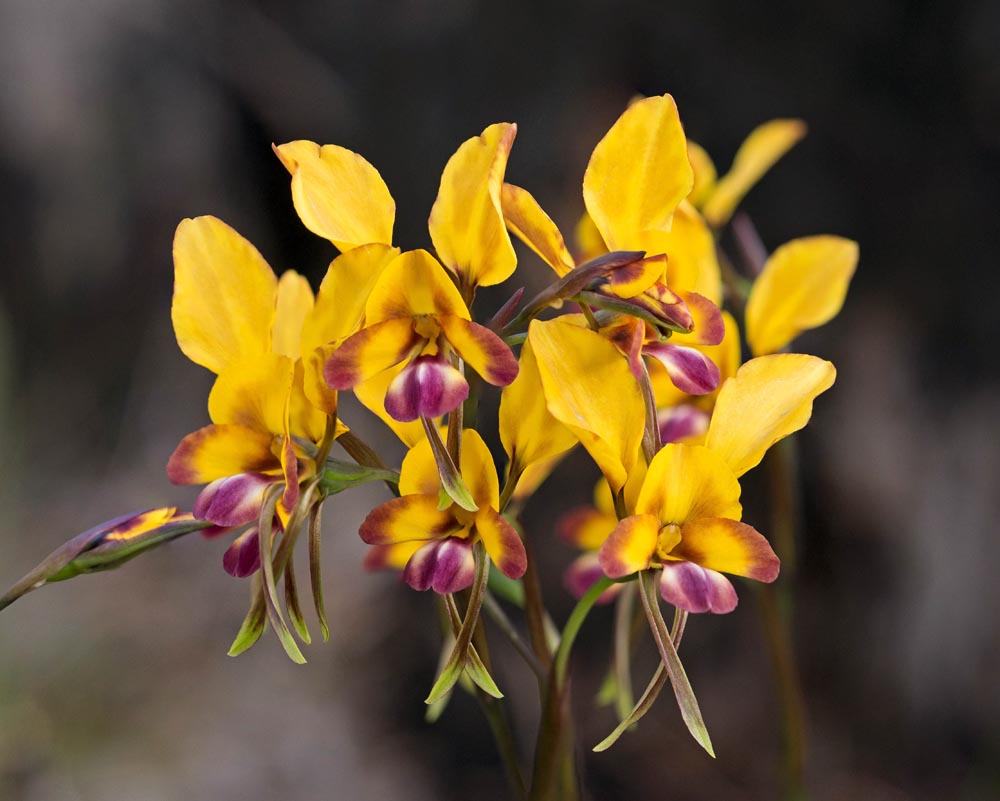 Flowers of this orchid are translucent with darker stripes and have a floral chamber formed of fused tepals above a plate formed by two partly fused sepals. Flowering begins in late autumn and continues through winter and there are three or more local colour forms with red, green or brown stipes. This orchid is very common and widespread in the local area and reproduces by seed and clonally by forming multiple tubers in winter. Tubers sprout in late summer, but the shoot remains below the soil surface until late autumn when it emerges and leaves form rapidly in early winter, followed by flowering, seed formation and seed dispersal.

Observations and flower baiting trials have shown that fungus gnats (Mycomya sp.) pollinate greenhood flowers. These very small insects (4 mm long) are strongly attracted to flowers as shown in the movie. This pollinator is locally common and relatively unaffected by habitat conditions, since there are similar pollination rates for plants growing in our backyard and in Warwick Bushland (23%). 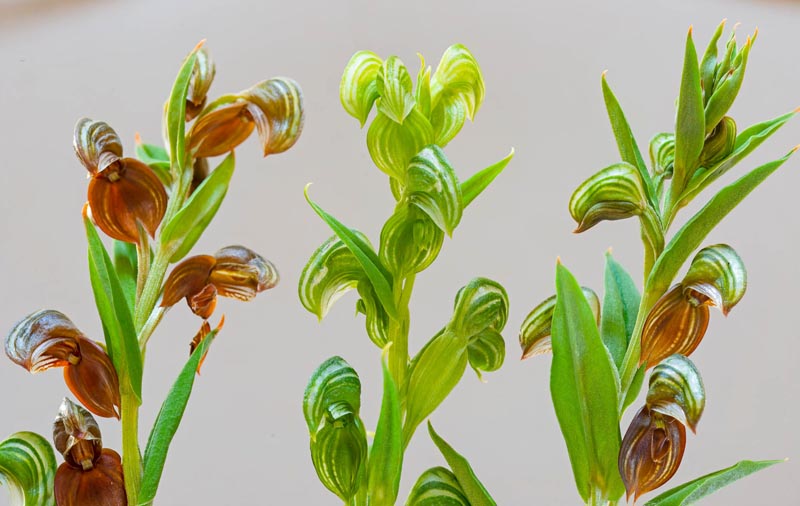 Colonies of this beautiful orchid are common in Warwick Conservation Reserve. They flower in late winter and early spring. Their flowers are bright yellow with red markings and are designed to fool pollinating insects by resembling other yellow flowers such as the Native Buttercup (Hibbertia hypericoides) that are out at the same time. This orchid deceives pollinating insects by looking like other flowers and lack nectar or edible pollen. Native bees and nectar scarab beetles visit these orchid flowers but many flowers fail to set seed as the pollinators quickly learn there is no reward. 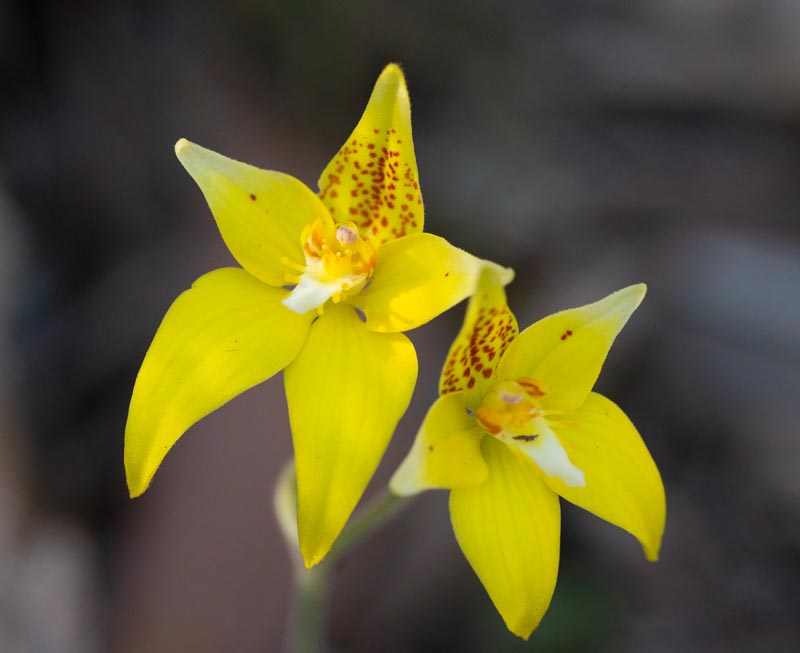 This orchid flowers in early spring and produces 1-3 relatively small greenish orange flowers about 3 cm wide on a 10 – 30 cm tall stem. It is also known as the Antelope  Orchid or Bee Orchid.

The Dancing Spider Orchid has amazingly complicated pollination, which requires a single species of male wasp to visit its flowers. As shown in the video, this species of thynnine wasp is attracted by a sex pheromone that occurs in the orchid flower, as well as in females of the wasp species. Wasps fly upwind towards flowers then crawl all over them looking for a mate that is not there and consequently transferring pollen between flowers. This deceptive pollination strategy is relatively inefficient as the male wasps soon learn to avoid patches where the orchid occurs. This orchid is becoming less common in Perth, perhaps because of its complex pollination mechanism, but is still thriving in Warwick Bushland Conservation Reserve. 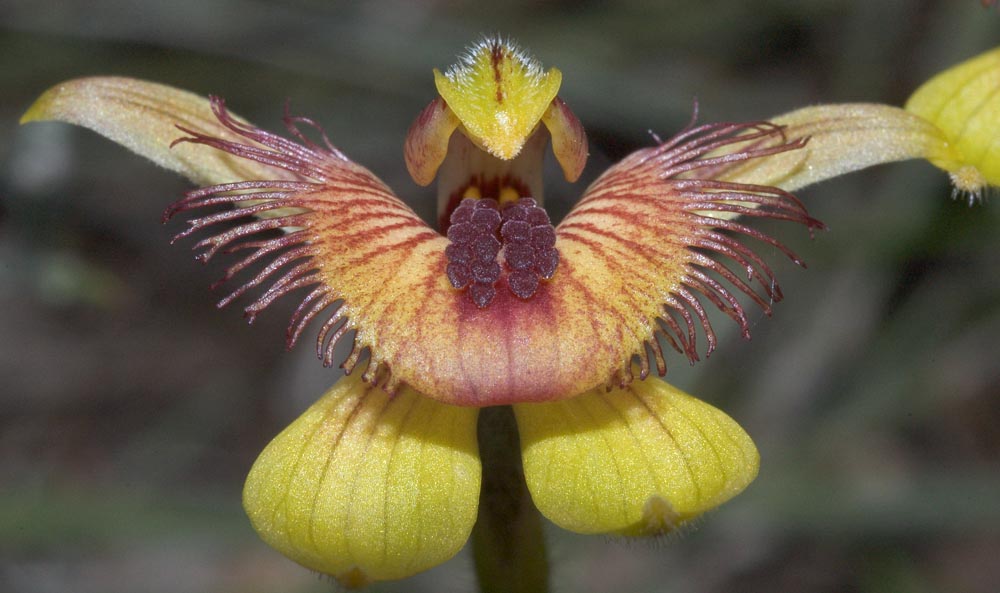 This orchid flowers in spring and produces 1-3 relatively large red and green flowers about 8 cm wide and 10 cm tall on a 30 – 60 cm tall stem. Like the Dancing Spider Orchid, these are pollinated by a single species of male wasp. As shown in the animation, this wasp is strongly attracted by a sex pheromone that causes them to transfer pollen between flowers. These wasps are rarely seen visiting flowers which have  a low rate of pollination. This orchid is becoming less common in many areas where it grows in Perth.

The Purple Enamel Orchid is an attractive West Australian native orchid producing purple star shaped flowers from September to October. These flowers are extremely glossy giving it an enameled appearance. The spring-flowering orchid often grows in groups that are scattered throughout Warwick Conservation Reserve. It is pollinated by visual deception of insects such as native bees or flies, when these insects mistake its flowers for other plants such as tassel flowers (Sowerbaea laxiflora). 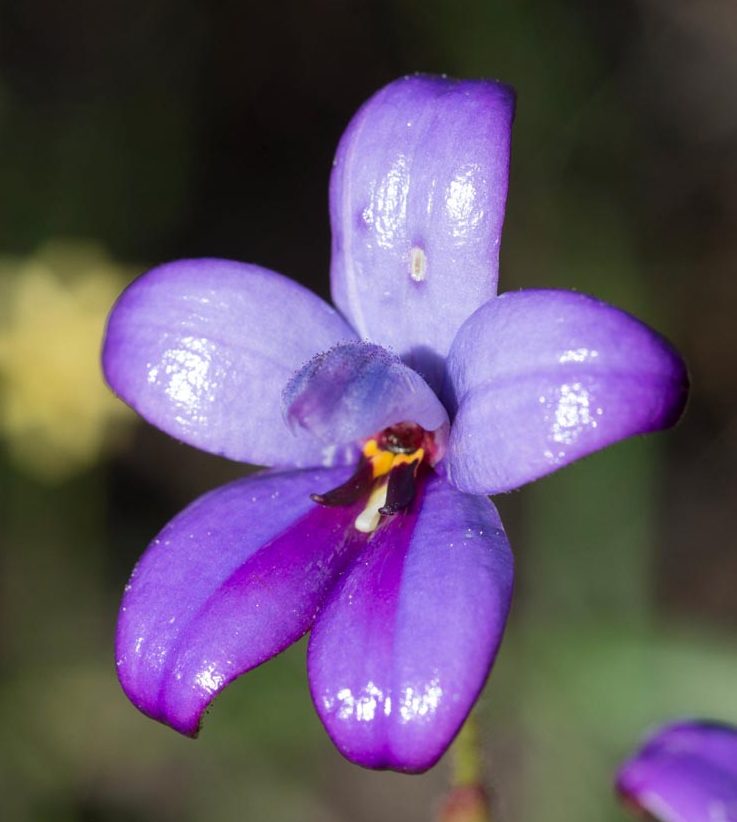 Sun orchid flowers only open on warm sunny days in mid to late spring. They differ from other orchids because all the petals in their star-shaped flowers are similar in size and shape. They lack a labellum, which is a modified petal and plays an important role in pollination by insects in other orchids. Most sun orchids have large spikes with many colourful flowers that are can be sweetly scented. These flowers attract pollinators that confuse them with other blue flowers that appear in mid to late spring. The Morning Iris (Orthrosanthus laxus) and Native Iris (Patersonia occidentalis) are the most common species that occur with these sun orchids, and are believed to be the real target of pollinating insects deceived by these sun orchids. The Scented Sun Orchid was once rare in Warwick Conservation Reserve but has spread rapidly in recent years and is now one of the most common and spectacular, orchids in the bushland. 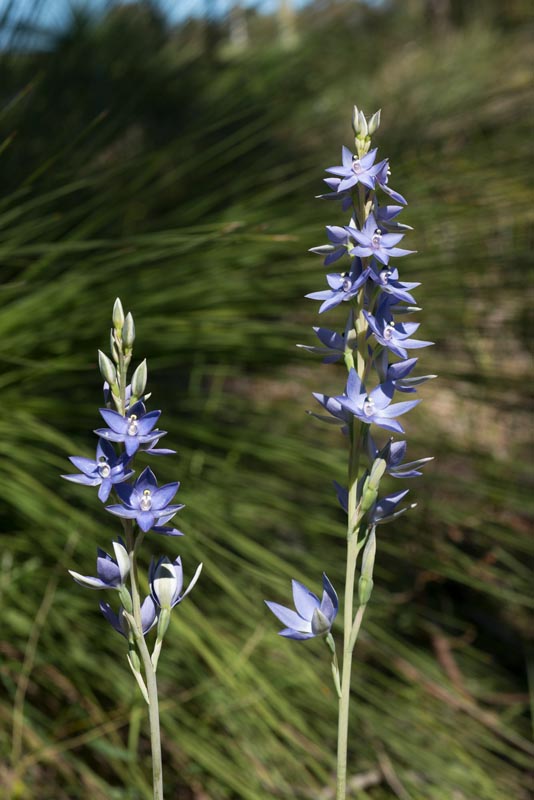 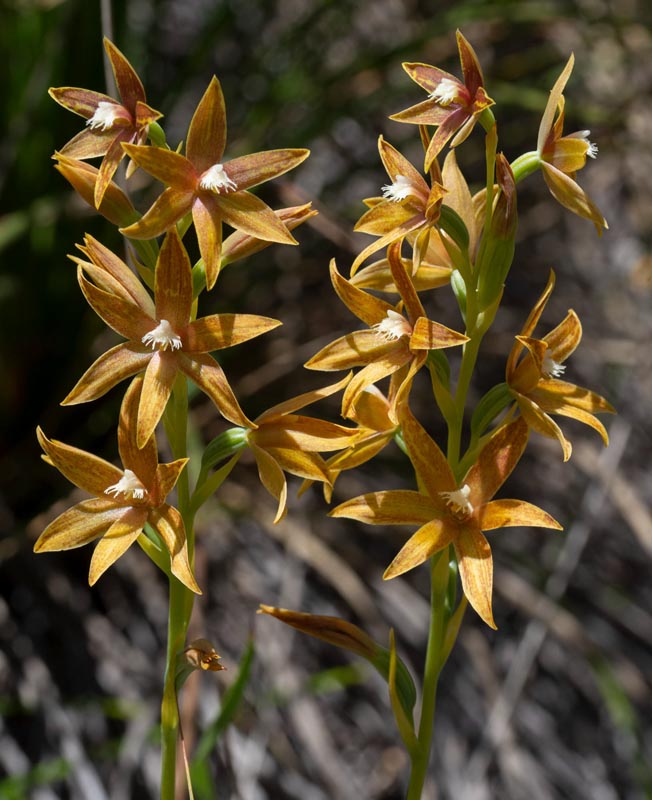 The Chestnut Sun Orchid is one of several sun orchids that occur in Warwick Bushland. This is our last orchid to flower each year (November to January). Orchids within the genus Thelymitra often close their flowers at night and during cool weather, so are called sun orchids. The Chestnut Sun Orchid is fairly common at Warwick Bushland but rare or absent in most other reserves in Perth. They often flower after their leaf has dried up and they do not need rain to develop seed (see reference above). 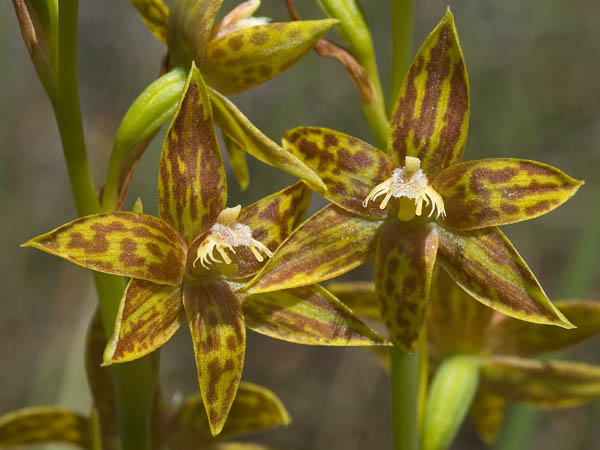 The Red Beaks Orchid produces large, fleshly, heart shaped leaves that grow flat along the ground and are commonly called Elephant Ears. This orchid only flowers after a hot summer bushfire, when it sometimes produces a profusion of red and white beak-like flowers. Its genus name Pyrorchis is derived from the ancient Greek word pyr meaning “fire” and orchis meaning “orchid”. It is one of the most abundant orchids in Western Australia and thousands of the leaves can be seen in Warwick Conservation Reserve. 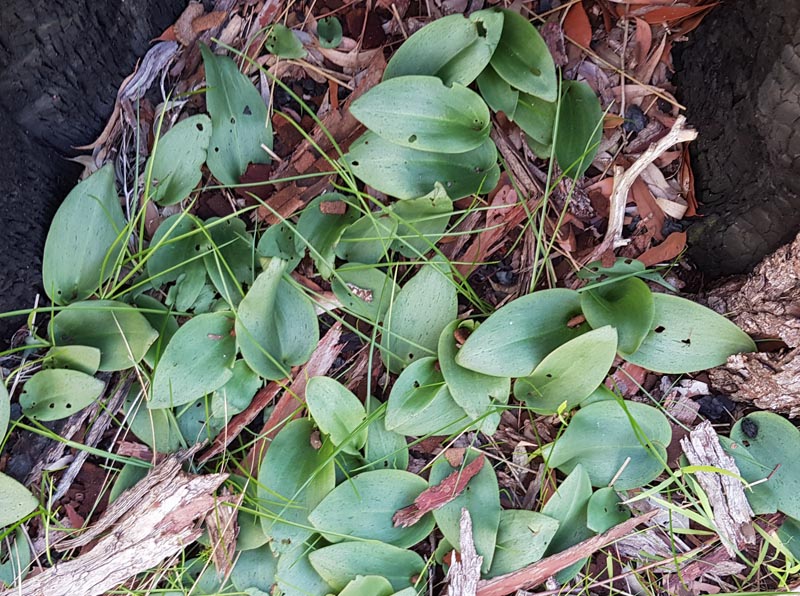 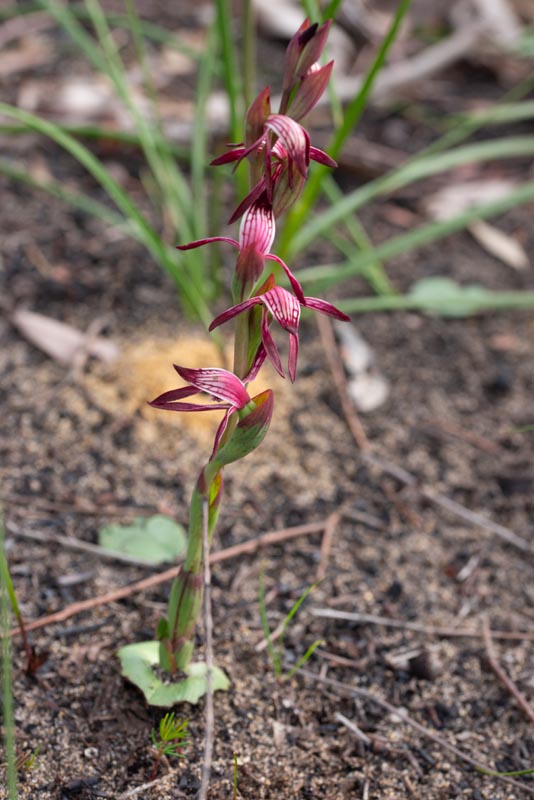